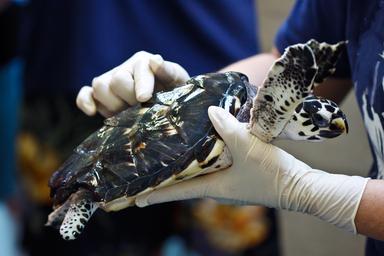 In the northeast, certain species of sea turtles, such as the Loggerhead, Green, and Kemp's ridley, are susceptible to "cold stunning."  This is a condition that occurs when the turtles are exposed and prolonged to cold water temperatures.  Normally, sea turtles migrate to warmer waters during the Northeast's winter months. Some turtles. however, tend to stick around. Cold stunning may lead to decreased heart rate and circulation, lethargy, and sometimes death.  To learn more about cold-stunned sea turtles, how to identify them, and potentially help save one, check out the Riverhead Foundation's lecture series on the topic.

It's vitally important that we all work together to keep wildlife wild.  Our actions can certainly impact a species' ability to survive and thrive.  We can help protect and preserve wildlife by following a few simple steps:

While feeding songbirds in ones’ yard is not harmful, there are important precautions to take, such as regularly cleaning your feeders. Do not feed other wildlife, such as raccoons and deer, because your actions may result in food conditioning, which can lead to disruptive human-wildlife interactions.

Observe wildlife from a distance to avoid disturbing their behavior.  Disturbing wildlife can disrupt their breeding behavior, feeding habitats, or care for young.

Never remove wildlife from its natural environment, even if you believe it is sick or injured. Call one of the professionals listed below for help and advice.

If you find a sick animal... 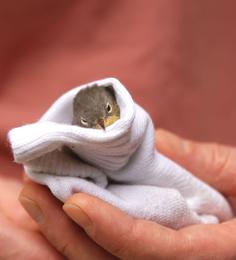 Due to Long Island's coastal environments, we often deal with sick, injured, or stranded marine wildlife. These species include seals, sea turtles, dolphins, porpoise, and occasionally whales. When you find one of these animals, it's important to keep a distance and contact professionals.  The Riverhead Foundation for Marine Research maintains a 24/7 "Stranding Hotline" - (631) 369-9829.

If you find an "abandoned" animal...

If you find an injured animal...