One of the purposes of a State Wildlife Action Plan (SWAP) is to encourage solutions to environmental issues. Many organizations have taken the recommendations given by the New York SWAP and used them to restore habitats and monitor species. These local programs have proven to be successful in restoring and rehabilitating the Island's environment. They helped garner support for new wildlife action programs that inspire hope for at risk species of wildlife. ​ 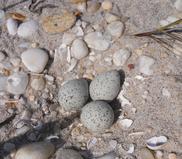 Restoring and Preserving Our Environment

Horseshoe Crab Monitoring
Cornell University Cooperative Extension’s Marine Program and New York State Department of Environmental Conservation developed the Horseshoe Crab monitoring project. Their goal is to get volunteer participants involved in annual horseshoe crab monitoring to aid in the collection of scientific data that is used in assessing the status of Horseshoe Crabs in NY State. Read more.

Plum Island
Plum Island is a unique 840-acre island, just off the eastern tip of Long Island’s North Fork. The area has been the base of an animal-disease laboratory since 1954 and is now run by the U.S. Department of Homeland Security.  Over 200 species of birds utilize the Island. Read more.

Calverton Grasslands
Located in Calverton, New York, these grasslands are home to various species of wildlife. Many of them are classified as "High priority species of greatest conservation need."  Read more.

Group for the East End & Town of Southold Plover/Tern Program

Over the course of the last 5 years, Group for the East End has monitored the piping plover and least tern nesting grounds in Southold, New York to develop a management program that will reduce the impact of tremendous pressures from the loss of habitat, shore hardening, human activity, and natural predators. Read more.